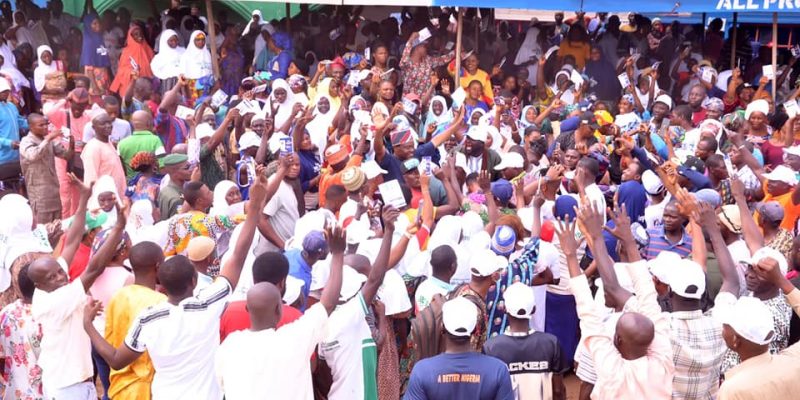 ‘I will deliver democracy dividends of empowerment to Ondo South’

Moving round four wards at Ile Oluji, the APC candidate told the people the he decided to start his campaign by visiting them ward by ward so that he could familiarize and interact with them one on one basis.

He noted that Ile Oluji holds strong significance to him as the good people of Ile-Oluji gave him overwhelming votes and support during the primary and he won’t expect less from them at the February 2023 polls with a promise that he will return with gratitude as well as giant fulfillment of his electoral promises for them.

Ibrahim assured the people of good representation that would have tremendous impact on the communities within the senatorial district if elected.

Addressing the people from ward to ward, Dr. Ibrahim said: “I decided to take my campaign to your doorstep ward by ward so that I can know you face to face.

“We need to interact and familiarize with each other so that I can know those who will vote for me. This will afford us the opportunity to make your challenges known to me and do my home work on how to fix most of the challenges through a representative interface with Federal ministries, departments and agencies (MDAs) when you elect me as your senator in 2023.

“I promise that I will give you an unprecedented good representation that would make Federal Government’s presence felt in our district.”

“Your visit has done us a great advantage as the people have been able to hear from you directly. They were also able to tell you what they expect from you when you become our senator next year.”

“This campaign is the beginning of what our party will do when the campaign starts in full. We are embarking on house to house campaign to avail our people with the action plans of all our candidates including our presidential candidate and our senatorial candidate has laid the foundation today.

“The people can now understand better that he’s familiar with their challenges and set to tackle them within his capacity as a federal legislator.”

In his address, the Ward 3 chairman of the party, Hon Akinsuroju said the people have great confidence in Dr. Jimoh Ibrahim and have already made up their mind to vote for him at the poll.

He said: “Our people have confidence in you sir and have already decided to vote for you during the general elections. It is good you came to see them one on one and heard you reel out what you are set to do when you get to the Senate.”

Chairmen of Wards 2, 4 and 5, Hon. Akinterinwa, and Hon. Famikola Lasisi, also commended the APC candidate for visiting the people at the grassroots and making his electioneering promises known to them.

The people of Okeigbo town were excited when candidate promised to make creation of a separate local government council for them his top priority when elected next February.

He commended the people for their endurance, saying the creation of the local government would save them from unnecessary hardship they go through in getting official things done because of the distance between the town and the present headquarters of Ile-Oluji/Okeigbo Local Government at Ile-Oluji.

Ibrahim made the promise when he visited Wards 7,8, 9 and 10 in Okeigbo as part of his familiarization and interface tour of the 66 wards in the district.

In his address, Ibrahim said: “I can see and feel your challenges particularly in getting things done officially here because of the large nature of this local government area.

“I will work with the state government and all necessary authorities to make it a reality by and by. This will surely engender meteoric development in Okeigbo for the betterment of everyone.”

During his visit, no fewer than 100 members of Peoples Democratic Party (PDP) at Okegbo defected to APC.

Ibrahim told members of APC and the new entrants from PDP that they should all work for the success of APC candidates in the district and the presidential candidate of the party, Asiwaju Bola Tinubu.

He promised to be a senator that would be accessible to the people irrespective of their social status.

Dr Ibrahim added that as a responsive and patriotic citizen, he is motivated by his zeal for community development and the growth of Ondo South, hence his decision to vie for the senate, noting that with the power of the thumb by the voters and the good people of Okeigbo he will win at the Senate election and his victory at the poll will be record breaking and resounding.

In his address, the Ward 10 party chairman in Okeigbo, Hon. Kayode Olasunkan commended Ibrahim for his tour of all the wards, describing it as unprecedented.

He noted that the heavy traffic jams along Ore/Benin Expressway at Ore axis has fizzled out as a result of the flyover constructed by the Governor Oluwarotimi Akeredolu-led administration.

Observing that the flyover has reduced the time and money spent by traders in conveying their goods across the axis, he described the overhead bridge tagged “Redemption Bridge” as a relief to those who transact businesses at the Omotoso Industrial Park as their trucks enjoy free flow of traffic in the axis.

Ibrahim commended the Governor on making the industrial park a reality and attracting foreign investors and industries to the park which has to a great extent mopped up the labour market in the state.

Ibrahim equally assured the people that life would be made better for the people if elected the senator in 2023.

On visit to Agbabu community, Ibrahim explained that the natural resource of bitumen would provide huge foreign earnings for the country when its exploration begins, urging the Federal Government to make appropriate arrangement for the exploration of the product to begin in earnest.